Loving the personal connection to each of these, lately! Definitely a massive soft spot, is Hungary. My grandfather was Hungarian (well, technically Romanian because of a border dispute at the time of his birth, but he definitely spoke Hungarian and identified as such) and his legacy lives on in my weird last-name-that-is-a-first-name. I’ve always wanted to travel to the village where he was born, and will definitely do that with my Dad one day, but in the meantime my personal experience with Hungary is very limited. I’ve been there a couple of times, once on my own as a couch surfer and once with my wife and some friends. 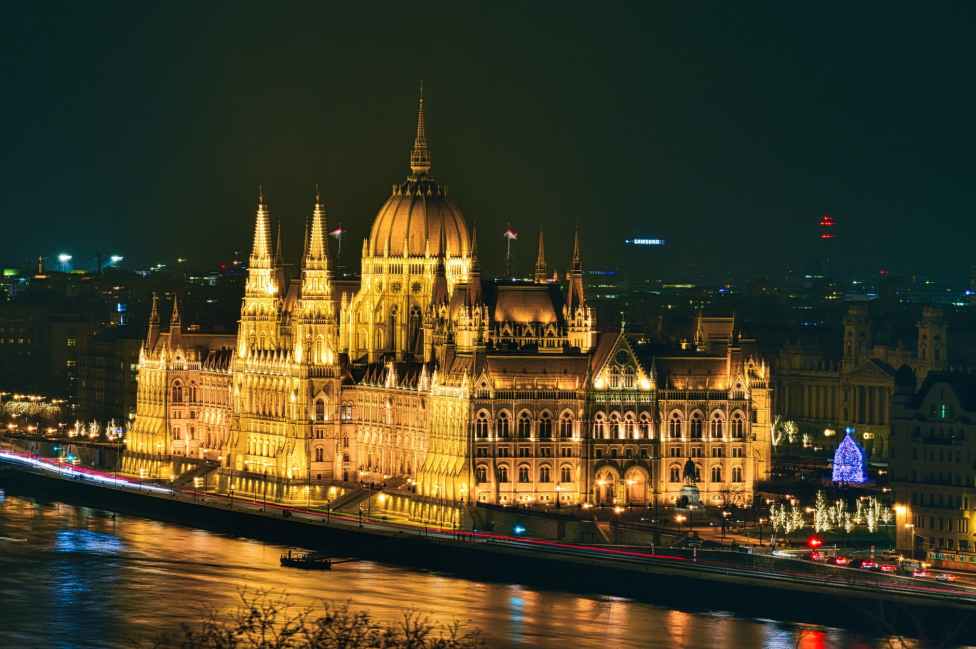 Photo by Nikolett Emmert on Pexels.com

As a couch surfer, I stayed with a local on the outskirts of Budapest, which was a great experience. He was studying to be a tour guide (I didn’t know that was a vocation in and of itself) and delighted in showing me the absolute best of the city and giving me mind-boggling history lessons, wonderfully flavoured with huge discussions and amazing examples of one of my other loves – architecture. It was such a joy to see Budapest from so many different angles and I fell in love with it as a giant monument of sorts. The atmosphere, however, was overall fairly unwelcoming to be truthful. I struggled a little with the closed-off nature of many of the locals that I crossed paths with; my host described Hungarians as rude, xenophobic, homophobic and generally just disgusting, but I certainly wouldn’t use such emphatic language. I’d be more inclined to say that leftist or even just open-minded / progressive thinking was a bit of an undercurrent or a resistance to the general sentiment. I have two favourite memories, one of which (of course) relates to food. The first was attending the opera and buying the cheapest seats in the house (row 2 of the proscenium where you can’t see jack if someone sits in front of you) and hoping that the crazy-expensive front row seats didn’t sell. They didn’t, so don’t mind if we do, we moved forwards and had literally the best seats in the house for the price of a cup of coffee. I found this image on budapest.org and the seats we were in are at the arrow:

The other was visiting my host’s father who spoke very rusty Russian with me in his kitchen as he fed us soup and handed us a couple of bottles of hand-made stone-fruit Palinka (Hungarian version of fruit brandy). I wish I could also recreate the Palinka for this experience but for now it’s just stored in the ol’ memory files like so many things. 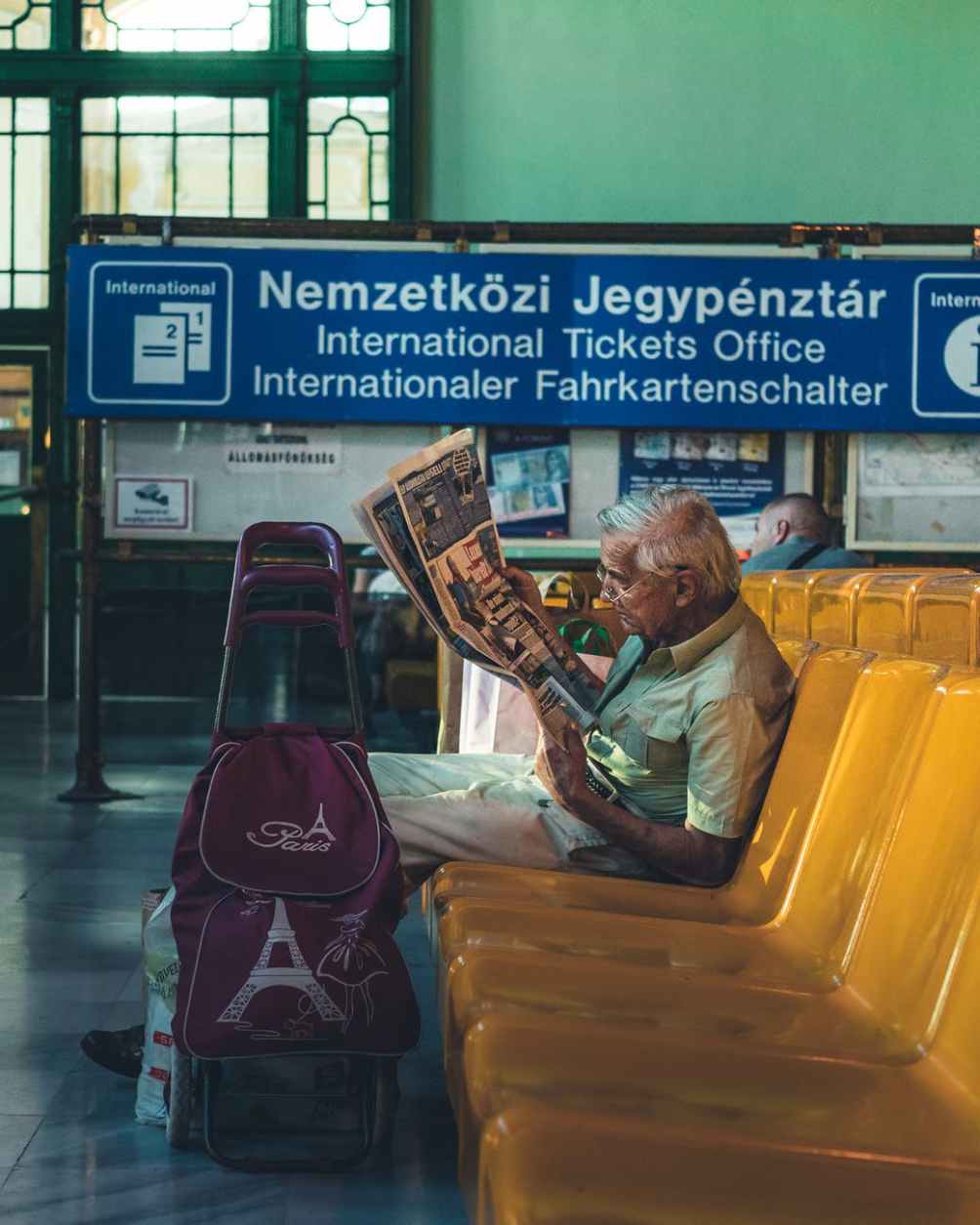 Photo by Szabolcs Toth on Pexels.com

Second time around was very different, in that my wife and I rented an Air BnB and delved a bit more into the ‘touristy stuff’ and ate out for every meal. As much as the train there was terrifying (Hungarian ticket inspectors refused to accept our perfectly valid Czech train tickets and we had to argue with them, then eventually buy new tickets, by speaking Czech to a Slovak-Hungarian guy who understood enough Czech to translate to the inspectors and then speak Slovak back to me to then translate (via Czech in my head) into English so my wife knew what was going on), once we got there all was forgiven. Instead of learning about ruin bars and the Jewish quarter, we drank there and ate at street markets. Instead of admiring the palatial public baths and the streets of the old town, we went to the cafes and soaked in the hot springs. It was a beautiful experience, and something I’ll remember forever. Definitely keen to go back one day and I am committed to exploring the countryside in future. 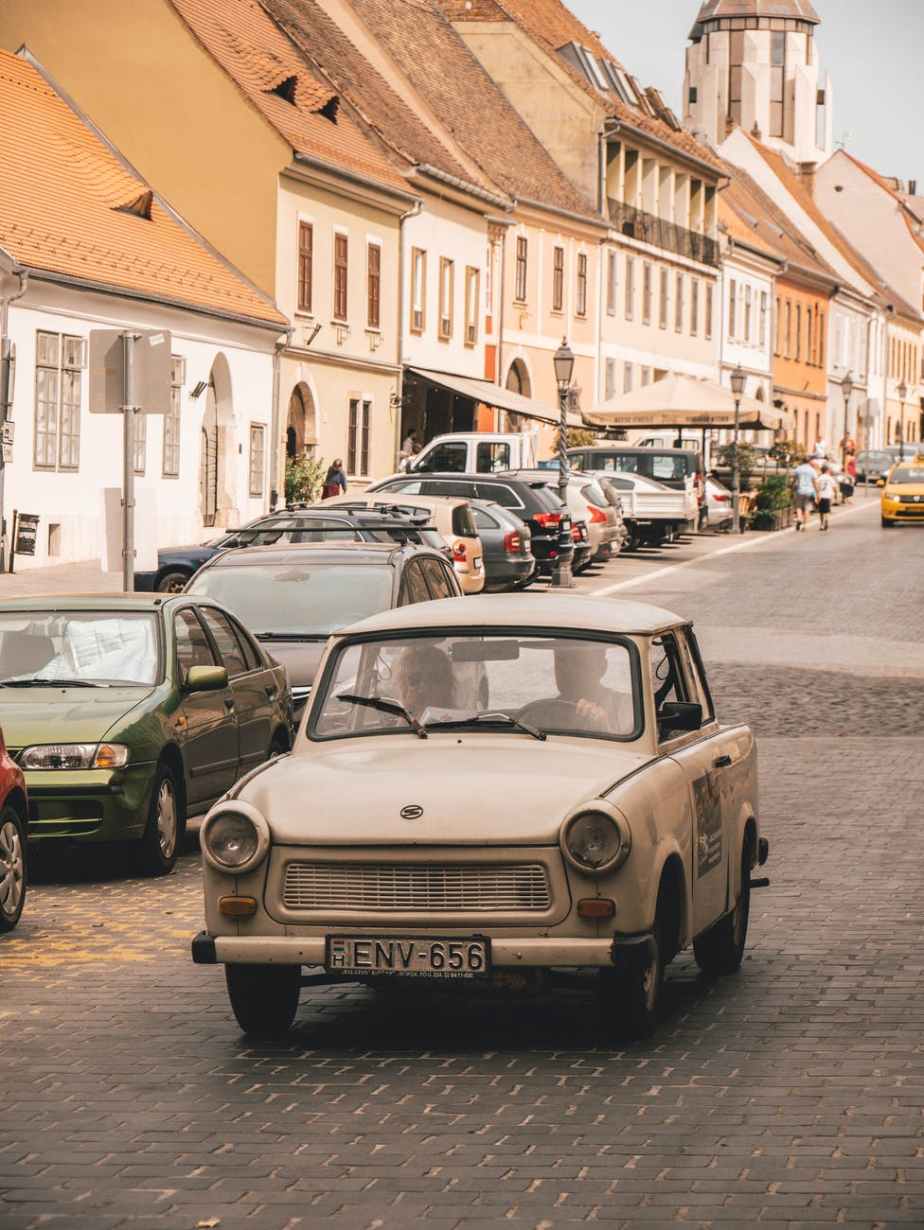 Photo by Alexander Naglestad on Pexels.com

Final story I have to tell involved an almost-third trip to Hungary. I woke up one morning to my wife asking “is it bad if I bought a dog last night while we were drunk?”. It took a while to make sense of the question, but I eventually elucidated that she’d contacted a vizsla breeder in the Hungarian countryside (they are Hungarian vizslas after all) and had her pick of the litter all agreed upon and put aside for us. It would have meant driving to Hungary (a full 2 countries away), which would have meant taking some time off work (which we didn’t have) and forking out over 1000 euros (which we didn’t have). But he was just so CUTE and we’ll love him and so on and so on. Unfortunately (?) reason got the better of us in the long run and we pulled the pin on it when we realised the cost and logistics of not only obtaining said puppy, but getting him home to Australia when we moved back. I felt terrible for the poor breeder and I’m sure the puppy found a beautiful home, but we’ve always pined for the trip-that-never-was and the puppy-that-never-was. 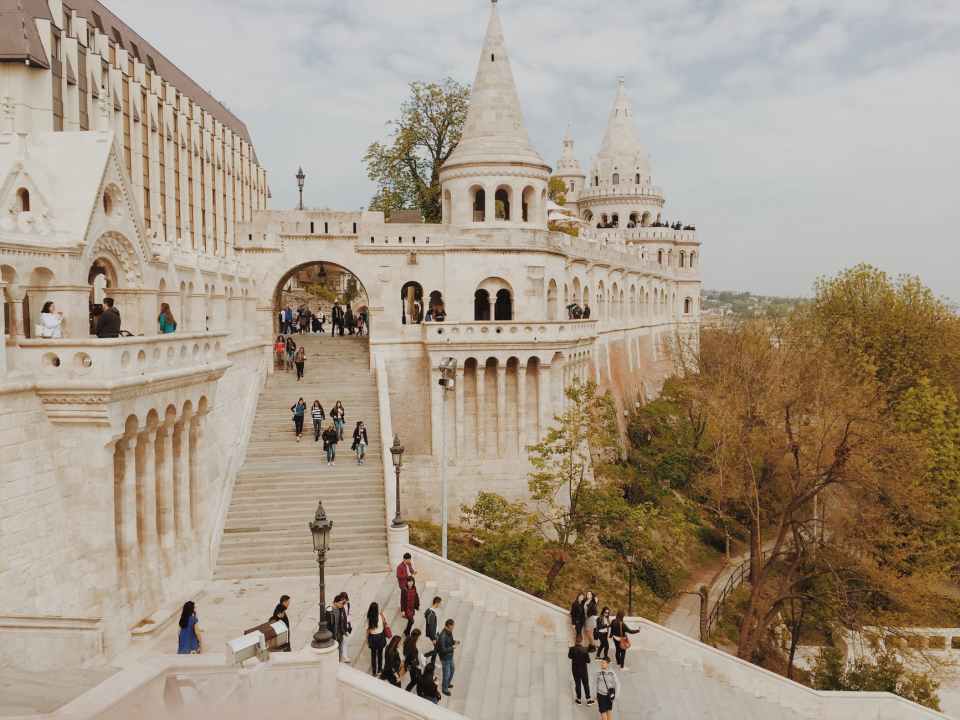 Photo by Nora on Pexels.com

What to cook was an easy question. Gulyas (or Goulash for Aussies, or Guláš for Czechs) is something we ate at least bi-weekly in Czech, likely due to the linkage between these countries (and Austria and Slovakia) under the Austro-Hungarian Empire. It’s the kind of thing that has evolved into countless variations over time (my favourite is actually a pork and sauerkraut version) in the countries it’s spread to, but I understand the ‘traditional’ version to be beefy, vegetabley, soupy rather than stewy, and laced with paprika in quantities some people might find obscene. It would traditionally be served with crusty bread or pinched noodles, but that depends who you ask because in Australia there are people who ‘traditionally’ serve it with pasta, or rice, or mash. I kept it simple and went with bread, because I didn’t want to overdo the starch when also serving a fried bread as part of the feast, but we’ll get to that. 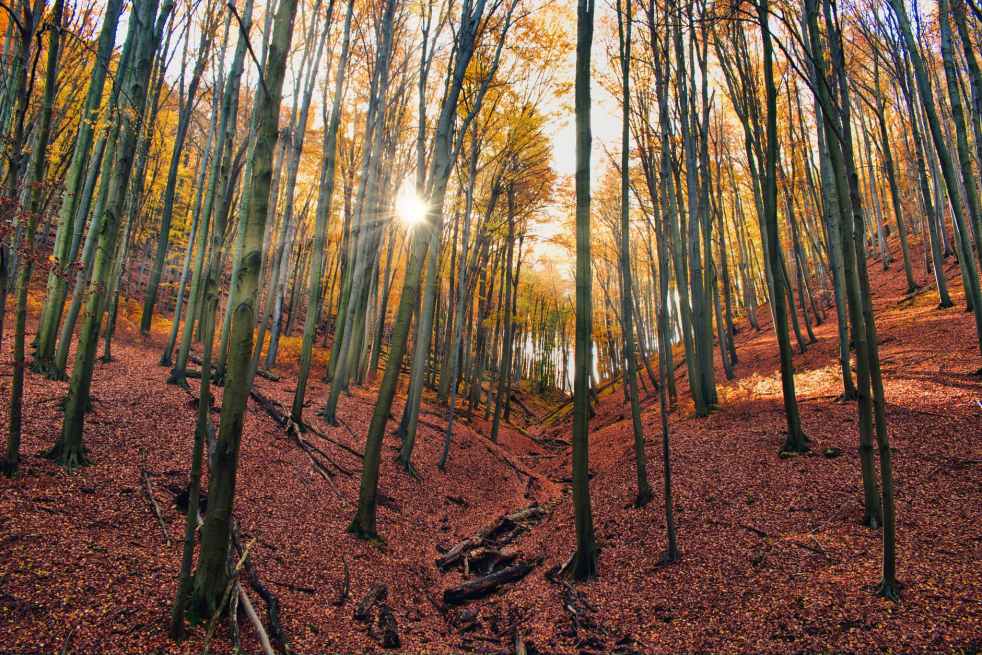 Photo by Nikolett Emmert on Pexels.com 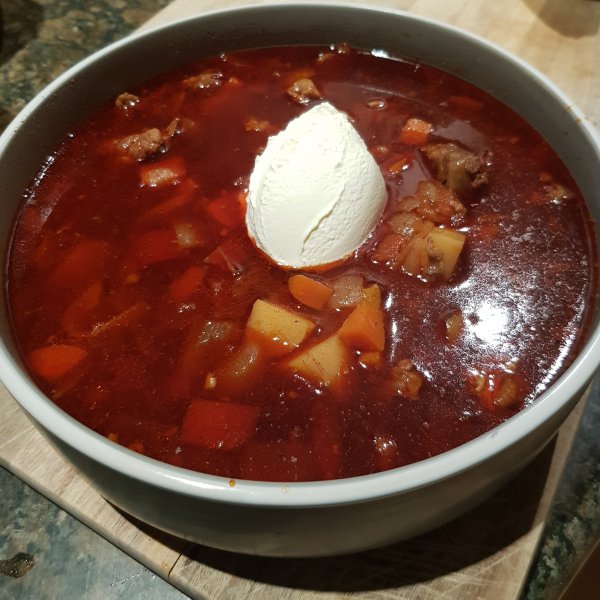 For some reason this is insanely popular in Australia – every market I’ve been to has a stall selling Lángos. Surely there can’t be that many Hungarians in Australia to launch it to these heights? Maybe because it’s just bloody good? Fried bread smeared with garlic and melted cheese (optionally, sour cream or about 1001 varations) is happiness in anyone’s language I suppose.

You can serve these however you like, but simple is traditional. We did a savoury version by rubbing a cut garlic clove all over (while still hot) and dumping the grated cheese on top, and a sweet version by sprinkling with cinnamon sugar (which is what my Dad remembers as a kid). You can just as easily use these as the base for all sorts of sweet or savoury concoctions, a bit like a pizza base or focaccia. The sky’s the limit! 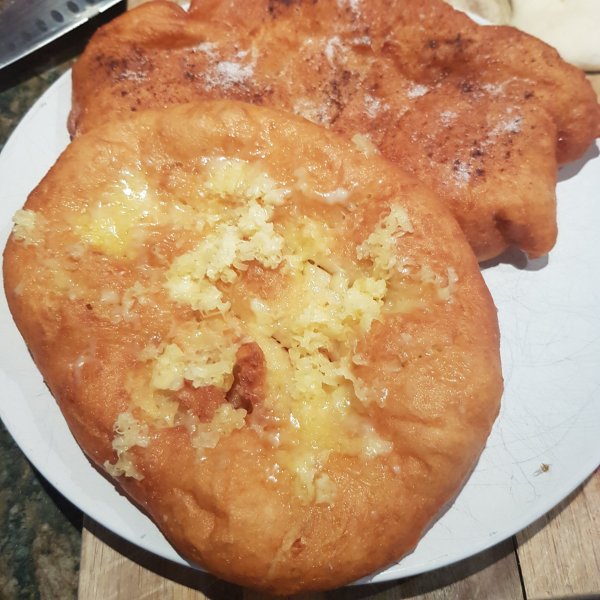 Nice and refreshing to counteract the rich and wintery gulyas. 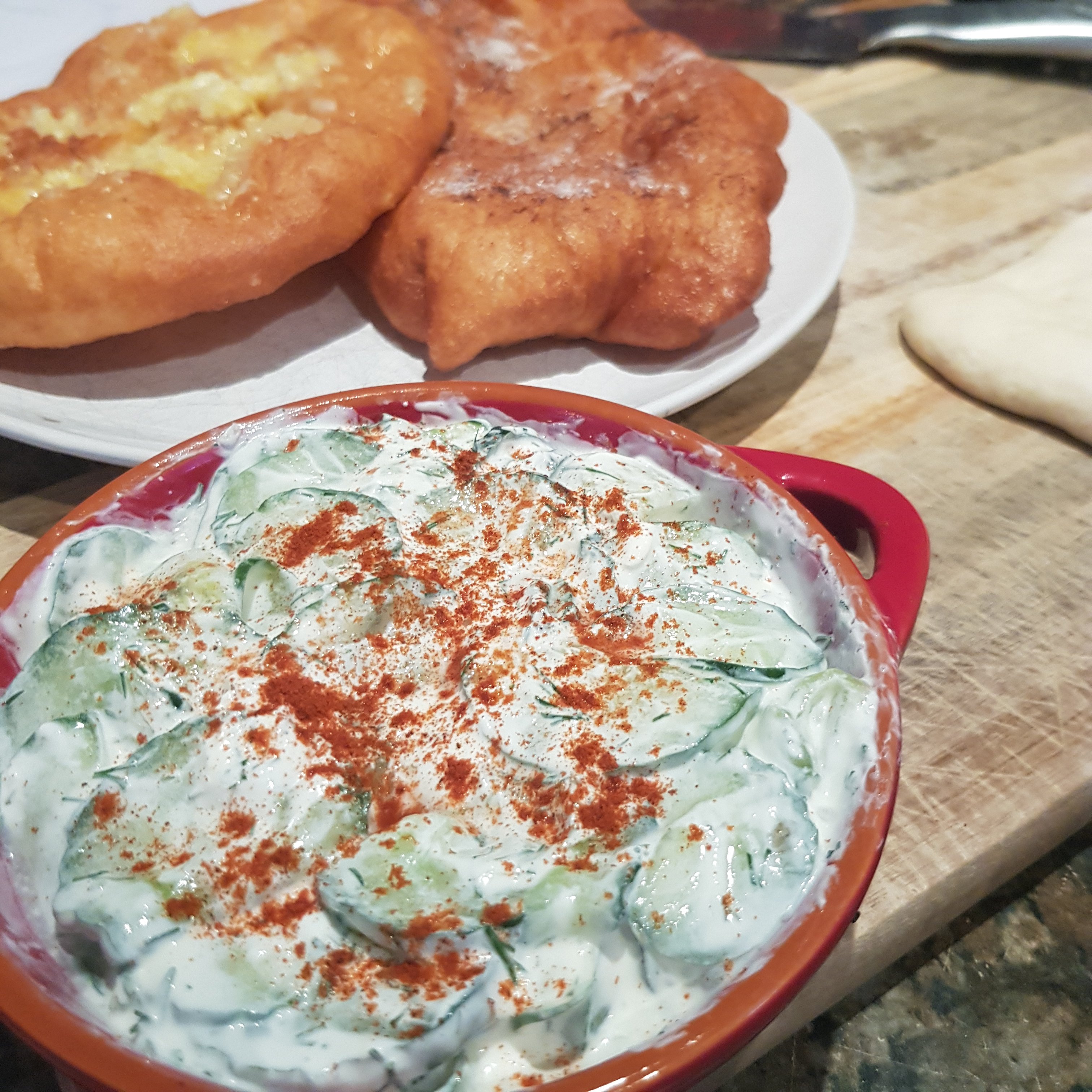