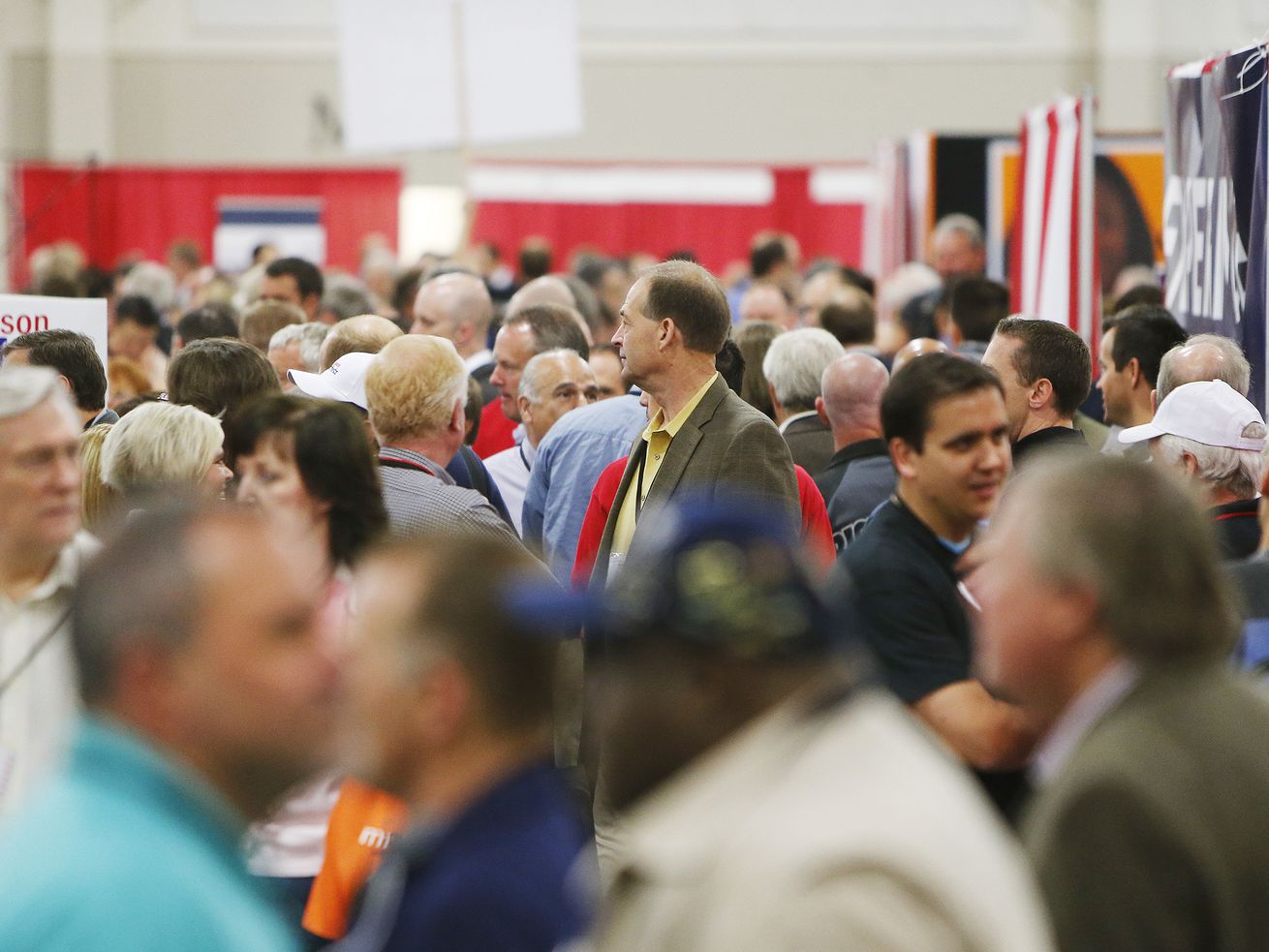 Attendees walk through the Republican State Convention at the South Towne Expo Center in Sandy in 2014. Because of the COVID-19 pandemic, this weekend’s GOP and Democratic conventions will be done virtually, with none of the in-person speeches or lobbying for votes. | Jeffrey D. Allred, Deseret News

SALT LAKE CITY — Utah Republicans and Democrats were supposed to be gathering Saturday to nominate candidates for the June primary election ballot, including for governor and for the 4th Congressional District seat, two of the state’s most competitive races.

But because of the coronavirus pandemic, both political parties are holding virtual nominating conventions, with delegates already reviewing prerecorded videos from the candidates before casting ranked-choice ballots that will determine who advances to the primary ballot.

Gone are the giant convention halls swarming with state party delegates as candidates compete for their attention at booths stocked with T-shirts and other giveaways before what’s usually a full day of formal speeches and multiple rounds of voting to advance no more than two candidates in each race to the primary.

The same is true of Rep. Ben McAdams, Utah’s only Democrat in Congress, who faces a challenge at his party’s convention from progressive candidate Daniel Beckstrand.

Both Republicans and Democrats originally were scheduled to meet outside of the Salt Lake area — the Republicans at the Legacy Events Center in Farmington, and the Democrats at Utah State University in Logan — in an effort to branch out to other parts of the state.

Now, all that’s happening on Saturday is that ballots will be cast by delegates, via an app for Republicans that’s available for early voting Thursday and Friday for the first time, and online for Democrats on Saturday only. Delegates will be asked to rank their picks in each race, eliminating the need for runoff ballots.

“Among delegates, we have seen an increase in interest and participation,” Utah Democratic Party Chairman Jeff Merchant said. “Of course, for candidates, it’s much more difficult, right? Candidates are not able to, for lack of a better way of putting it, press the flesh, shake hands and kiss babies’ foreheads and all that kind of stuff.”

Democrats have been holding online candidate forums for delegates since last Saturday and will post speeches by the candidates. What’s missing, as Merchant said, is “the big rah-rah, you know, balloon-falling, loud music type of thing. But that’s just the nature of what we’re dealing with.”

Utah GOP Chairman Derek Brown said the five-minute videos produced by Republican candidates that are intended to simulate convention speeches that often include video introductions and endorsements will be posted on the party’s website by Wednesday morning, along with a welcome video from Gov. Gary Herbert.

But, Brown said, there’s already “a lot of activity going on behind the scenes, with the delegates and the candidates that the average person isn’t seeing. If you see some of the posts online by delegates, they are receiving information — swag, and that kind of thing, from candidates.”

The freebies include “creative stuff. One candidate had a bingo card with their name on it, for different phrases used in the convention. One had a bag. One had a towel. Delegates are being contacted continually by the candidates,” he said.

Ranked-choice voting, something that’s only been used on a limited basis in Utah, is being used by both Republicans and Democrats. It replaces rounds of voting in the same race, with the lowest vote-getter dropping off until one candidate either passes the required 60% to advance to the ballot, or only two remain in the running.

“I guarantee every delegate participating would rather do that than sit through the possibility of nine or 10 rounds of voting, because that would take several hours,” Brown said. Typically, delegates often begin trickling out of a convention before all the voting is completed, leaving some decisions to just a few die-hards.

Merchant said he’d like to see ranked-choice voting stay even after in-person conventions come back.

Both party leaders said the switch to ranked-choice voting has led to more civility in the various races.

Chris Karpowitz, co-director of BYU’s Center for the Study of Elections and Democracy, said there’s some evidence that ranked-choice reduces negative campaigning because candidates are cautious about offending voters whose first choice is someone else.

In ranked-choice voting, seen as an instant runoff election, the candidate with the fewest votes is eliminated, and the votes that were cast for that eliminated candidate are then counted in favor of the candidate ranked next on the ballot, a process that repeats in this case until a candidate gets more than 60% of the vote or only two remain.

“Candidates do need to distinguish themselves from each other. They have to differentiate in some way. Can they do that in a way that avoids alienating voters whose second- and third-choice votes they need is the question,” Karpowitz said. “That’s a fine line that I think many candidates are walking.”

The political science professor said this year’s political conventions are going to be a learning experience for everyone involved. He said Utah’s Republican and Democratic parties deserve praise for putting together a process that makes voting safe for delegates and candidates.

“In one sense, it gives the candidates more time or more ability to control and to produce exactly the message they want. What it loses is the immediacy of the feedback from the people in the room and the energy, the either positive or negative energy that comes from those moments,” Karpowitz said. “That might not always be bad.”