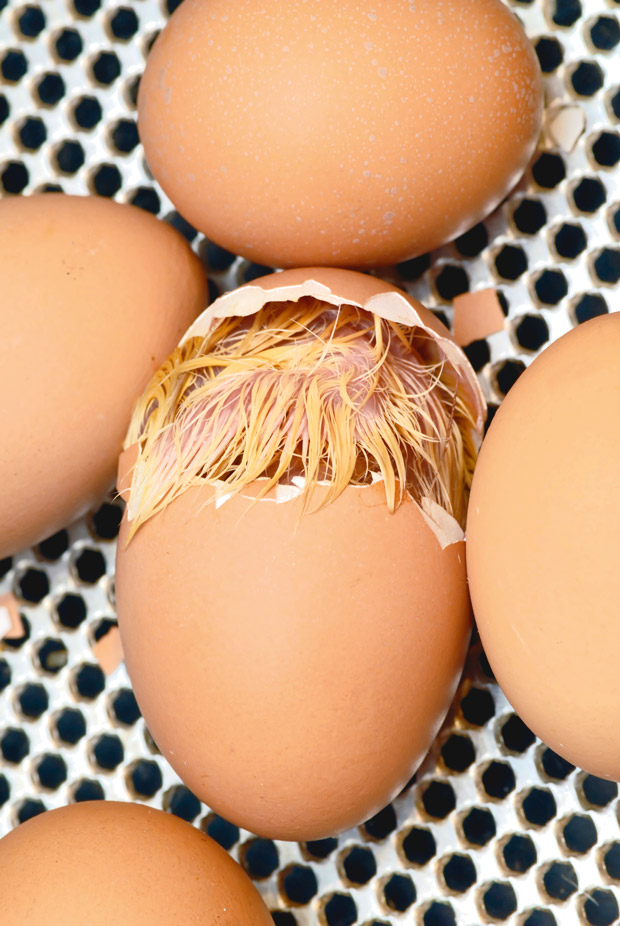 An egg that doesnt hatch may seem a mystery, unless you know how to read the clues.

If you have a rooster in with your hens, its always tempting to hatch some chicks. Sometimes, a mother hen will hide away and take the decision out of your hands. You can also put eggs under a broody hen or use an incubator.

But the incubation process is a delicate operation. Sometimes eggs dont hatch. Sometimes, the chicks may hatch but have health issues, or they may start hatching, but die before theyre out of the shell.

Heres how to narrow down what went wrong, and whether it was a fault with the parents, the egg, the incubator or incubation process, or the aftercare.

HOW DO YOU KNOW IF YOUR EGGS ARE FERTILE?

You can get a good idea of the fertility rate by cracking open a few eggs from a clutch (eggs laid 1-10 days after mating).

All eggs have a tiny white dot on the surface of the yolk called the germinal disc. Its a cluster of cells that will develop into a chick if the egg is fertilised. In an unfertilised egg, the germinal disc looks like a bright white spot, 1-2mm across. 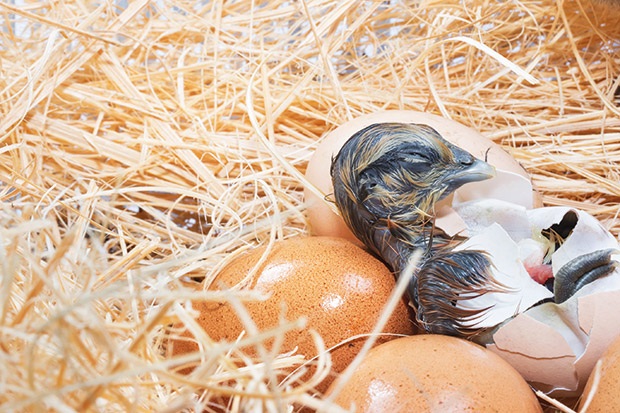 When a hen is mated, she keeps a store of sperm inside her body, which can remain viable for up to 10 days or more. She releases a little sperm to fertilise each yolk as it begins its journey through the oviduct. By the time the egg is laid about 24 hours later the fertilised cells will have multiplied several hundred times.

A fertilised egg has a paler, larger circle, with a pale-yellow centre. It will measure 3-4mm across, and look like a round donut with a hole in the centre.

A fertilised egg will slowly cool down after its laid, but the germinal disc will continue to grow, to around 5mm across, containing 40,000-60,000 cells.

The optimum time for an egg to cool down from laying until you put it in storage (or leave it in a broody hens nest) is six hours. In that time, the internal temperature should reduce from around 40C to between 12-20C.

At this stage, development ceases. The embryo will wait in suspended animation until incubation begins. This clever trick means a hen can lay an egg a day for 5-10 days to create a clutch, but she doesnt need to start incubation until she has finished laying the last one.

This way, all her chicks will hatch within 24 hours of each other, around 21 days from the time she starts sitting. 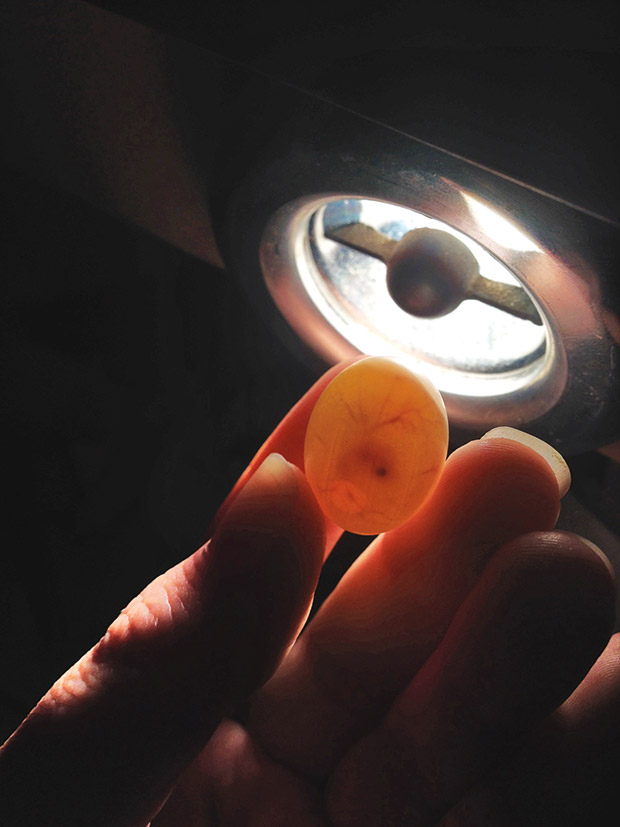 Candling is when you shine a bright light through an egg to illuminate its contents. It gives you a good idea of an embryos development. Dont candle eggs after Day 17 as any movement can harm the chick.

If eggs are left in a nest on a hot day or under a broody hen and stay around 35-40C, the cells will continue to grow past the stage where development can be suspended; any subsequent cooling then kills them.

In this case, the egg will appear to be unfertilised if you candle it. If you crack it open after the other eggs have hatched, again you might class it as unfertilised. However, its really a very early death thats not detectable.

BUYING EGGS FROM A BREEDER

If you plan to buy hatching eggs from a breeder, ask them to give you an idea of how fertile their birds are:

have they already hatched eggs from this mating?
how many live chicks hatched (hatching percentage)?

No breeder can give you a guarantee of fertility. Storage temperatures at their end and during transport may influence your hatch results.

However, fertile eggs are posted around NZ all the time. Buying fertile eggs is a good option to consider if you want a particular breed, but the best birds are too far to pick up.

If you need to store hatching eggs until youre ready to incubate them, keep them at an even temperature night and day, ideally 12-16C, stored pointed end down. Write the date of lay on each egg in pencil so you can quickly check how long youve stored it.

If you need to store hatching eggs longer than seven days, for example, if youre waiting for a hen to lay enough to fill your incubator, tilt them at an angle, and change the tilt every 24 hours. Many breeders place them in cardboard egg cartons, with one side propped up on a book.

The yolk is held in place by chalazae at either end of the egg, but these rope-like structures will slowly stretch if they remain in one position for too long. Changing the angle keeps the yolk centred in the albumen, so it doesnt drift and end up lying against the shell or air cell. If the yolk moves out of place, it can cause faults in the developing chicks.

Eggs can be set either under a broody hen or in an incubator. The recommended temperature may vary slightly between different types and brands of incubator, depending on the mode of ventilation, insulation, and humidity supply. Its important to read and follow your machines instructions. If possible, do a test hatch before you incubate expensive or hard-to-source eggs.

A hen laying a clutch of eggs over 5-10 days wont begin incubation until she goes broody or clucky. When those hormones are activated, shell sit tight day and night, only leaving for a few minutes each day to get food and water.

If youve stored eggs correctly (12-16C), you need to bring them up to room temperature before putting them under the hen or into an incubator. A sudden change from cool to the incubation temperature of around 37.5C will cause the eggs to sweat. Theyll lose moisture through the shell, and fluid will sit in the thousands of pores all over the shell surface, allowing bacteria on the surface of the egg to get through the pores.

Its a particular risk if the egg is dirty or if its had its protective cuticle removed by washing or scraping. Eggs laid first tend to take longer to incubate and hatch.

Eggs also need to be turned daily from side to side to keep the yolk and embryo centred inside the egg. Some incubators do this automatically. More basic models require you to do it. A mother hen naturally knows to do this.

If you provide perfect conditions, then youd expect 100% of fertile eggs to hatch perfectly formed chicks.

However, theres almost always a percentage of eggs that fail to hatch. Some of the chicks that hatch can be deformed or non-viable. Some eggs will contain embryos that have died during the incubation period.

HOW TO ANALYSE A DUD EGG 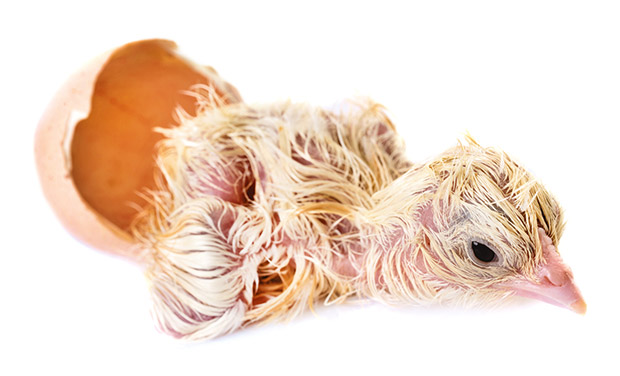 Its good practice to break open unhatched eggs. It can often show you if the egg was fertile, at what stage the embryo died, and possibly why.

Infertile eggs will contain entirely yellow contents, with no signs of an embryo or blood. However, these could also be very early deaths due to:

faulty transport, eg eggs knocked about in the post;
temperature shock;
incorrect storage before incubation;
failure to develop in the first couple of days of incubation.

Death at Day 4
Youll see blood pumping through the heart of a tiny, developing embryo if you candle a fertile egg on Day 4. If the embryo dies at this point, you may still see a faint network of blood vessels inside the eggs contents.

Death at Days 6-8
An embryo dying at this point will show a large, black eye.

Deaths from Days 11-14
A chick will be small, fully formed with down and toenails. Its unusual to have deaths during this period of incubation, but if bacteria or mould contaminate an egg, it can kill the embryo and rot the contents.

Deaths from Day 18-pipping
By Day 18, the chicks body is filling most of the egg. Youll be able to tell when it died depending on whether there is still yolk in the egg, or if it has been fully absorbed into the body (as it will be when the chick starts pipping).

In the last two days of incubation, the chick turns its head, so its pointing towards the air cell at the top of the egg. It should be lying with its head at the broad end, tucked under its right wing.

Neck spasms move the head until the egg tooth (a temporary tooth on the outside of the beak) forces itself into the air cell. At this point, the chick takes its first breath.

Eggs set upside-down may cause deaths at this stage, as the chick will be unable to reach the air cell to take its first breath. High humidity can result in wet, floppy chicks that drown in the process of breaking the internal membrane into the air cell.

3 REASONS WHY FERTILE EGGS MAY NOT HATCH

There are many causes of hatching failure, and its often difficult to pinpoint a particular cause.

If parents are closely related, especially for several generations, you may start to see:

A shortage of essential vitamins and minerals, or the inability of one or both parents to metabolise them, can cause deformities in hatched chicks and unhatched embryos.

Incorrect temperatures, humidity, or turning of the egg can cause deaths and deformities.

4 EGGS YOU DONT WANT TO INCUBATE 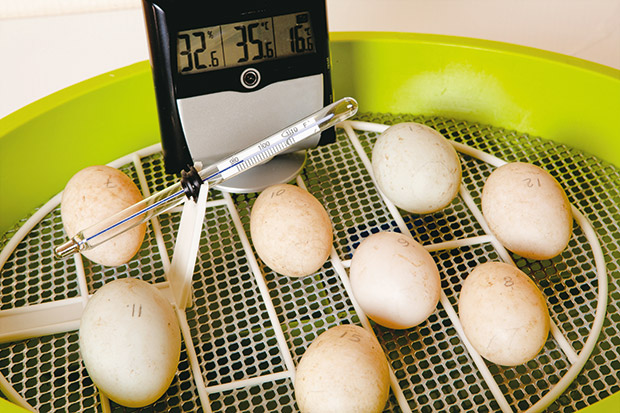 Cracking open a dud egg can be risky. Its likely the contents will be rotten; worse are the eggs which explode when you touch them, covering you in putrid ooze. Wear old clothing and perhaps cover the egg with a bag or towel as you touch it to avoid splatter.

This is why your eggs arent perfect

The post How to determine if youve got a dud egg (and what it can teach you) appeared first on thisNZlife.