5 Pieces of Advice from Popular Millionaires

Sometimes we tend tothink we have life figured out, only to realize we dont! Life has a funny way of throwing us curve balls, and in all fairness, sometimes we hit home runs. Then, there are other times where we find ourselves on the bench waiting to get in the game. Why not take some words of encouragement from people whove been there and succeed? Taking pieces of advice from popular millionaires can help! 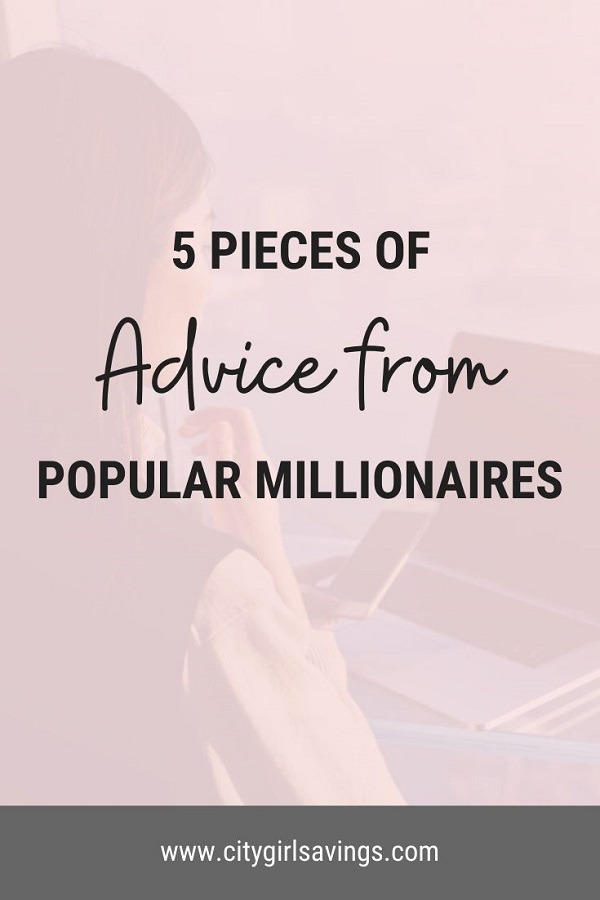 A persons perspective on lifes situations, specifically on what the outcome will be, is very important. Looking at the glass half full is more optimistic (and helpful) than looking at it half empty. Take a peek at these five pieces of advice from well-known millionaires who have learned and shared.

The late Steve Jobs is one of the most well-known and wealthiest people to have ever lived. He was an American business magnate, entrepreneur, industrial designer, investor, and media proprietor and most well-known for creating Apple Inc.

One of the reasons that allowed the legendary CEO of Apple to focus so intently was his ability to prioritize. Paying attention to the details helps you continue your growth. The less you have to backtrack or go back to something, the more time you have to develop your craft.

Zhou Qunfei, the founder and CEO of Lens Technology, is the worlds richest self-made woman. She contributes her persevering personality on how she was able to make her dreams reality. She lost her mother when she was five and her father went blind and lost a finger in a factory accident.

To earn tuition, Zhou dropped out of high school at age sixteen and went to work at a watch lenscompany eventually leading her to multiple promotions. Fast forward, she launched her very own lens technology company and was eventually approached by Motorola to be a supplier.

Her lesson on persevering is a strong one. There will be times in your life that you will want to give up, but remember that you worked so hard to get to where you are now. It just wouldnt be worth it to throw in the towel just because there are a few bumps in the road.

Being yourself is not just some clich statement. We are all created in our own way with our individuality waiting to be shared with the world. Richard Branson is a big believer in being yourself. He is a British business magnate, investor, author and philanthropist.

He founded the Virgin Group in the 1970s, which controls more than 400 companies in various fields. Richard has had to learn to embrace his uniqueness, rather than allow it to be an impediment. Yourself is always the best version of you and being yourself is among the best advice I have ever received, says Branson.

Being patient is probably one of the hardest things for a person to do when they work hard and are awaiting the results. Oprah Winfrey is an American media executive, actress, talk show host, television producer and philanthropist...Like you didnt already know that!

She has been quoted saying, You can have it all. Just not all at once. There is so much truth in that statement! Patience is a true virtue and sometimes we like to see the results as soon as we put the work in, but that unfortunately, is not how it works. Trust your process and know that the work that you put in will pay off.

Bill Gates who is known for more than his wealth is always giving back to the community in some shape or form. He is best known as the principal founder of Microsoft Corporation. He learned at an early age from his mother that giving back is the true gift of success.

His mother once said, From those to whom much is given, much is expected. What that means is, if you are able to make a difference, then you should without hesitation. He is one of the founding members of The Giving Pledge,through which wealthy individuals commit to donating more than half of their fortunes. He is also the co-founder of the Bill and Melinda Gates Foundation, which works to lift children out of extreme poverty.

Knowing that if someone else was able to do it, then so can you, is so empowering! It is so important to understand that you can do anything you want, as long as you put your mind to it. It always starts with a simple thought or idea and action to follow.

What advice have you heard that has helped you stay on track or push past that moment of plateau in your life? Join in on the conversation with us on our Facebook. We love hearing from the community! Additionally, dont be shy to follow us on IG and Twitter @citygirlsavings and stay up to date on how if budgeting done right can improve your life.