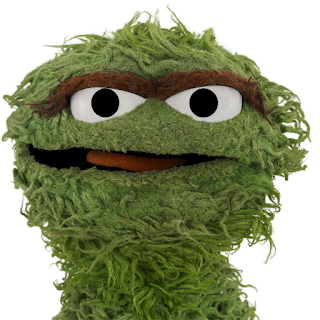 43A. Lima family legumes that yield vanilla: MADAGASCAR BEANS. No. Flat-out wrong. Madacascar beans are lima beans, but vanilla does not come from a lima bean, the vanilla bean is a completely different legume. Yes, the best vanilla beans are grown in Madagascar, but that doesn't excuse the error here.

21D. Kids' furniture that may have checkered-flag sheets: RACECAR BEDS

Let's get straight to it. I can't see the point of this puzzle. The grid has mirror symmetry only, presumably to cope with the single 15-letter themer, which itself is clued completely wrong, and all this to conceal twelve letters in two across entries and one down entry? I'd have put the grid-spanner in row 8, or find another 15-letter entry to balance. SCARBOROUGH FAIR would have fit the bill. And sprinkled a few more CARB's around.

And the reveal? "three long puzzle answers" so forget SHANIA TWAIN and THESE DREAMS which apparently are there just to take up space.

I do hate having to put on my Oscar the Grouch hat, but the concept of this puzzle left me cold. I would love it if I'm missing something clever and someone can point out the error of my ways. I even squinted at the grid pattern to see if it looked like the chemical structure of a carbohydrate, so I did try. I think I'll just move right along and I'll wait for someone to take me to task for my theme-ignorance.

It's a shame, because there were some nice moments in the fill:

17. Like some mice: OPTICAL. I'm using one right now, in fact I had to change the battery because it just died this morning. There'a little on/off button on the bottom, but I never remember to use it.

20. Part of AMPAS: ARTS. Did you know this acronym? The Academy of Motion Picture Arts and Sciences. They award Oscars (the non-grouchy kind)

28. With 28-Across, sad trombone sound effect: WAH. I like this little entry, I don't think I've seen a self-referential clue like this before.

42. American Eagle intimate apparel brand: AERIE. Makes sense. The Aerie line is new to me (BTW, American Eagle is the brand), but didn't take long to figure it out with the help of some crosses.

49. Taunting phrase from internet trolls: U MAD BRO? I think this was my favorite fill today. Rich tends to be pretty conservative with new "in the language" phrases but they can give the fill sparkle.

56. Candidate's goal: SEAT. After all that campaigning, stumping, kissing babies, knocking on doors, striding about stages at debates and orating at town halls, you need to take a seat, that's for sure.

60. Type of computer monitor cable: HDMI. Of course the nerd in me had to go and look up the acronym. High-Definition Multimedia Interface if you're interested.

62. They're put to paper: NIBS. Ah, the fountain pen, bane of a grammar schoolboy's existence. You'd put it in your blazer pocket, the cap would come loose, and ten minutes later you've got a huge ink stain all over your shirt. You got in the neck from the teacher of the next class as you had to beg some ink for a refill, and you got it doubly in the neck from your mom when you got home and she had to try to wash your shirt.

2. AirPod spot: EAR. I've said before, this is one of those inventions that Apple should have left on the drawing board. And have you seen the price of the things? People walk around with them stuck in their ears so they don't lose them and just look silly.

4. Stuffed shells: TACOS. Food! I slow-roasted and smoked a beef chuck last weekend for barbacoa. I've got a little left over for tacos tonight. I love the little "street taco" size tortillas, some chopped onion and cilantro, a dab of smoky chipotle salsa, a squirt of crema and a squeeze of lime juice. I'm making myself hungry!

9. "Hamilton" role for Tony nominee Phillipa Soo: ELIZA. Eventually, I'll get to remember the character names and the Broadway cast of "Hamilton", but for now it's crosses all the way.

11. Hall of Famer Parseghian: ARA. The legendary head coach of Notre Dame Football, and, often forgotten, Northwestern before that. Ara brought the Notre Dame football program back from the brink of extinction.

15. Painter known for "happy little trees": BOB ROSS. Never heard of him, nor his trees. Certainly a cultural thing, as Google turns up a ton of stuff and links to videos on YouTube. Solid crosses helped here.

22. Heart hit song with the lyric "Every second of the night I live another life": THESE DREAMS. Not a big "Heart" expert, but this was reasonably easy to deduce.

34. "We __ Soldiers": 2002 Mel Gibson film: WERE. The book on which the film is based is titled "We Were Soldiers Once, and Young". Joe Galloway, who co-authored the book with Col. Hal Moore worked as a reporter for UPI in the early days of the Vietnam war in 1965 and was awarded the Bronze Star for his bravery during the Ia Drang battle. He, David Halberstam, Neil Sheehan, Malcolm Brown and Peter Arnett together did an incredible job to get the truth of what was happening in Vietnam out to the world, all the time working to support each other while competing for news.

40. Simon of Duran Duran: LE BON. He, along with fellow crew-members and the skipper were pulled out of the English Channel by a rescue helicopter when his racing yacht "Drum" lost its keel and capsized in severe weather during the Fastnet race in 1985. Le Bon was trapped below when the boat turned over. His hair didn't look this good: 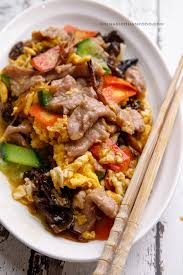 46. Quarters: ABODES. Abodes tend to be "humble" in screenplays and novels. Here's the Duke of Marlborough's abode in Abingdon, just north of Oxford in England. Nothing too humble about this place, and that's just the house. The grounds are not humble either! Winston Churchill was born here, and the place was saved from ruin by the 9th Duke who married Consuela Vanderbilt, her of a quite large railroad fortune. I'm sure the Duke had no idea of her wealth. (ya right!)

And with that, I think it's a wrap - like the moo shu pork! Here's the grid: 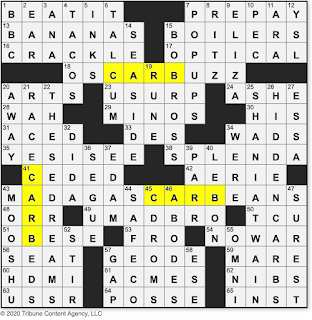