I had to search out some photos for something and re-found an old one taken at ICI (Imperial Chemical Industries) in Stowmarket from perhaps the 1950's? I put it on the Stowmarket Past and Present Facebook page and almost straight away there was a comment from someone who I was at Stowmarket Grammar School with in the late 1960's.(now living overseas). From my grandad's surname he had wondered if it was me writing? A while later another person commented to say the man on the left was their late father - How brilliant to have a name! The power of Facebook!
My family had lots of connections with ICI, my Mum worked there as a paint colour tester and met my Dad, a machine operator there. My Dad's sister met her husband there through my Dad. Then my first husband was a apprentice machinist there when I met him in the 1970's.
The man on the right in the photo is my grandad, perhaps he worked there too although I didn't know he had. My cousin might know.  ICI in Stowmarket was a huge employer back in the 40's, 50's, 60's, 70's and 1980s. Producing the famous Dulux paint. The factory is still there- even bigger but was taken over in the 90's I think, it's probably still a big employer. 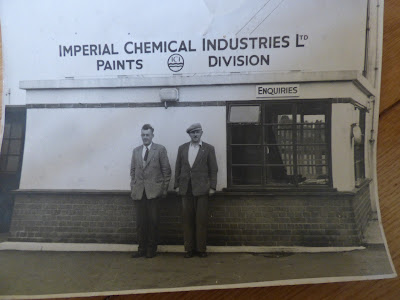 I'm sure the rain this week has done the garden a lot of good - hopefully it will have helped the fruit trees and bushes. The cooler weather was good for the young plants in the greenhouse........... until they get a good root system they tend to flag in hot sunshine. Years ago I used to paint the greenhouse with some white stuff specially made to keep the heat down but then on dull days not enough light gets through.
I've planted the cascade tomato plants into the baskets on the garage wall. Hope it's not to early but the bricks of the wall hold a lot of heat so hopefully that will keep them warm and today I have to venture out to deliver the remaining tomato plants to my BiL . The first lot of Climbing French Bean plants are now outside. I always put a little  fence round them made from sacking stapled to stakes, to protect from wind and frosts and animals. I'll leave sowing runner beans as late as possible in the hope they'll keep producing right up to the first frosts.
There were only 2 spears of asparagus this week but I pulled and cooked lots of rhubarb.

According to something I came across on a local facebook page, the Post Office are stopping Saturday deliveries of letters supposedly to "ease the burden on postal workers". Although they are still delivering parcels and collecting from letter boxes.


This week I am grateful for

Hope everyone has a good weekend. As well as dropping tomato plants at BiL's house, I'm picking up a bag of compost from a company who've just started to  run a fruit and veg stall in a village hall car park (with social distancing of course) and posting a birthday card - that's my excitement for the weekend!