In Evelyn Waugh’s “Scott-King’s Modern Europe,” a school’s headmaster and Scott-King, the classics teacher, discuss the declining enrollment in Latin and Greek classes. The headmaster wishes to do away with the classics: “Parents aren’t interested in producing the ‘complete man’ any more. They want to qualify their boys for the modern world.” He then asks if Scott-King might teach history and economics. He refuses.

“Then what do you intend to do?”

“If you approve, headmaster, I will stay as I am here as long as any boy wants to read the classics. I think it would be very wicked indeed to fit a boy for the modern world.”

“There, headmaster, with all respect, I differ from you profoundly. I think it the most long-sighted view it is possible to take.”

Is the headmaster correct? Is there any reason to study Latin today? After all, why spend all that time and energy learning declensions and conjugations and memorizing vocabulary when no one speaks Latin anymore? Cui bono? (To whose good?)

Latin is an inflected language, meaning the grammatical function of words in a sentence depends on the endings of those words. Many beginners try to translate a Latin sentence following the rules of English word order, which simply doesn’t work.

“The sailor loves land” is the only way we can render that sentence in English with any coherent meaning. But in Latin, because grammar and meaning depend on word endings, inflection is king. A common equivalent Latin sentence for “The sailor loves land” is “Nauta terram amat,” with the “-a” on “nauta” indicating a subject, the “-am” indicating a direct object, and the “-t” on amat indicating an indicative active present tense third-person singular verb.

Because of these word endings, however, we can also write “Nauta terram amat” in the following ways, and any first year student of Latin will know they all translate, “The sailor loves land.”

So, you may wonder: What’s the big deal? Why is this a reason for undertaking Latin?

The big deal is that study of an inflected language forces us to learn a good deal of grammar. Unlike French and Spanish, which like English depend on word order to make a sensible sentence, Latin demands we understand language in a different way, with inflection forcing us to open the hood and get at the mechanics of language. Students have often told me they learned more grammar from studying Latin than from English grammar workbooks.

As a result of this difference, Latin also provides a gymnasium for the mind. It exercises our brain. Like calculus, like chemistry, the study of Latin trains us to think more clearly and logically. By coming at language from a different angle, students engage in arduous but rewarding mental gymnastics.

Moreover, Latin provides a great introduction to Romance languages. French, Spanish, and Italian are all related to Latin, and knowledge of the language of Cicero and Aquinas makes learning these other languages much easier. Former students of mine who took even two years of Latin excelled in other foreign languages in college.

Latin opens windows on the English language. Well over half of all English words are derived from Latin, and the longer the word, the higher this percentage grows. A great majority of our four- and five-syllable words are rooted in Latin soil.

Nor should the historical significance of Latin for Westerners be overlooked. Not only will students learn the language spoken and written by the ancient Romans, but they will also be taking part in an education common to men and women from Caesar to Thomas Jefferson, from Virgil to Dante and Luther. For 1,400 years after the fall of the Roman Empire in the West, scholars, ecclesiastics, and statesmen read and spoke this ancient language. Even just a century ago, many colleges required Latin for entry.

To study Latin makes us a part of this great tradition.

Because families approach learning in different ways, I am uncomfortable touting specific Latin programs. Here are some thoughts at large.

First, you can find programs at educational companies like Memoria Press that begin Latin in early elementary school. I once taught fifth and sixth graders using that outfit’s “Latina Christiana.” We would finish Book I of the program and then the next year proceed to a high school text and go at a slower pace than normal.

That high school text was “Henle Latin First Year.” You can find it online along with tests, answer keys, and a teacher’s manual. Henle appealed to me because of its logical approach to learning Latin forms and its limited use of vocabulary. Still in print after 70 years, “Henle Latin” first introduces students to all the noun and adjective forms, then verbs, and then other grammar.

Its disadvantages? “Henle Latin” says very little about the culture of Ancient Rome, and some students, especially the girls, disliked the focus on military affairs. As a result, when we finished “Henle” in the middle of our second year of study, I would switch to the used copies of “Latin For Americans” I kept in my classroom.

Those who prefer a less grammar-focused, reading curriculum should look at such texts as the Cambridge and Oxford Latin series. Though I’m not a fan, many teachers and students enjoy the stories in these books and the focus on Roman culture.

If you know a homeschooling family or some other Latin student or teacher, ask them for recommendations.

Study Latin daily. As is true of any foreign language, spending time each day on your Latin is one of the keys to mastery.

“Repetitio est mater studiorum.” (“Repetition is the mother of studies.”) Latin and memorization go hand in hand. To succeed in Latin, you must memorize the vocabulary and the word endings. This can be done in short sessions. If you’re learning the forms of the first declension noun “terra,” for example, set a watch and see how many times you can say “terra, terrae, etc.” in one minute. Probably you can get through it eight or nine times in 60 seconds. Say that form aloud two minutes a day, five days in a row, and you will have memorized the declension.

Never go on to a lesson if you don’t understand the previous lesson. Latin is like math, a cumulative acquisition of knowledge. You wouldn’t begin algebra if you had never learned multiplication. Latin operates the same way.

On index cards write out your Latin vocabulary words on one side and the English translation on the other. When you write nouns, be sure to include the genitive case: terra, terrae—land, of the land. When you write verbs, be sure to include the principal parts: amo, amare, amavi, amatus—I love, to love, I loved/I have loved, loved/having been loved. Review the cards frequently, and stick those words in your head.

If possible, form a study group. Often camaraderie makes studying easier. Work out the exercises together.

Finally, be positive in your approach. Latin offers challenges, but you can face those challenges, overcome them, and become not only more proficient at Latin, but also a stronger person.

Studying Latin carries with it a certain cachet.

Suppose your grandmother, suspicious of homeschooling, asks you what foreign language you are learning. If you reply, “Spanish,” she might say,” Well, that’s very practical these days.” Should you answer “French,” she may remark, “French is a beautiful language.” If, however, you respond, “Latin,” your grandmother will probably make one of two comments. She may first ask you why anyone would study a dead language, in which case you should cite the above arguments. But she may just as likely say: “Latin? Latin? You must be smart.”

And so you are.

Jeff Minick has four children and a growing platoon of grandchildren. For 20 years, he taught history, literature, and Latin to seminars of homeschooling students in Asheville, N.C. Today, he lives and writes in Front Royal, Va. See JeffMinick.com to follow his blog. 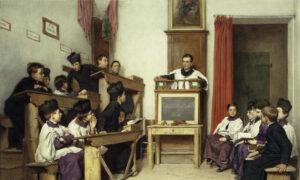