Kickoffs, and a free webinar!

by admin April 29, 2020
Ok, I may be veering a little too much from the "here's this useful tech" message lately by talking about feelings and stuff. But this post does have some purposes as well.

Many of you know I am a huge fan of narrative as a functional, multi-point language target, and of Story Grammar Marker® in particular (also see StoryChamps (Peterson), SKILL (Gillam), EmPOWER/BrainFrames by the brilliant Bonnie Singer and Anthony Bashir, Thinking Maps, for a range of discourse development tools. Story Grammar Marker works through a sequence(s) of linked icons, my favorite of which is the Kickoff, representing the initiating event of a narrative. A kickoff is what starts a story (good analogy from football/soccer), like a lightning storm, or a Zoom lunch bunch with classmates.

I love the clever and memorable aspect of the Kickoff, but it's also a representation of many of our students' Zone of Proximal Development-- language they have to learn to formulate whether they are in grade 2 or grade 10. Zooming in on a Kickoff helps us understand what has actually happened, in real life or in literature or a video. It's may be a problem or just "a development," and links to understanding of characters, perspective taking, setting, and Theory of Mind/perspective taking elements like feeling, thoughts, and plan.

So, to go "out there"- through this crisis I have just somehow sensed signs from my grandmother Nomie Murphy, passed away many years ago. These have included a summer plant (Dusty Miller) favorite of hers, which I don't usually plant but did last year, and which lived through the winter in my back porch plant box, though they aren't supposed to. A few other things have made me feel her presence like she's saying, "Hey, it'll be ok." I'm not particularly religious, but I'm pretty spiritual.

SGM's icons, while awesome, aren't the kind of visuals you see just everywhere. So you can imagine my surprise, while on a VERY RAINY walk yesterday on a customary path of late, I walked by this on the sidewalk and had to do a double-back: 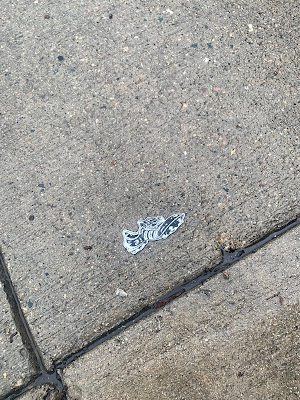 Right near the supermarket I frequently accompanied my grandmother to, Stop & Shop, right near where I also thought she might be a Forsythia bush that "spoke to me." What can I say, it's a time.
I'm still a little shook. 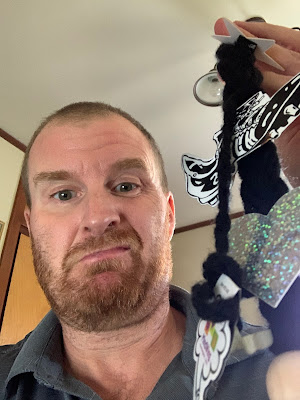 What does it mean? Is it acknowledging, "Yeah, you're in a Kickoff," saying more are to come, or what? Anyway.
So, this post does have a useful point from Planet Earth. Show YOUR Kickoffs, even meta-ones like the kickoff that's a kickoff, as therapy activities supported visually. In this visual I conducted a conversation with a SGM-familiar client who asked, "Did you drop it there?" We focused on use of the feeling icon (confused) and thinking bubble (random! Good vocab word/idiom. I didn't want to get into the whole sign-from-grandmother thing). The story/picture made for a good scaffolded retell, as well.
On a Google Slide, natch. The SGM icons are available digitally on the Mindwing website ($7.95) 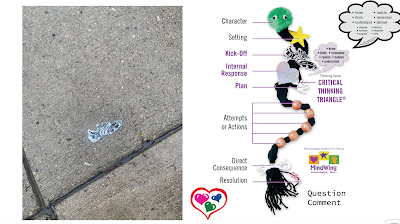 And if you've come this far with me (don't blame you if not), my second useful point is that I will be co-presenting a FREE webinar-- Technology Tools to Engage Children in Science & Social Studies During Distance Learning Sessions-- with Maryellen Rooney Moreau on Thursday at 2:30, click here to register, replay available later.
Phew, that was a lot to unload. Stay safe, sane and healthy folks.
Disclosure: Sean receives a consulting fee for blog writing and presentations here and there from Mindwing Concepts, whose methodology and products he values among the best in the field. He does not receive any royalties from product purchases,
Share Share on Facebook Tweet Tweet on Twitter Pin it Pin on Pinterest
Back to Feed