Now if you were my editor and I wrote ‘Single Malt Whiskey’, your red pen would be out and scrawling through my words. But, no. 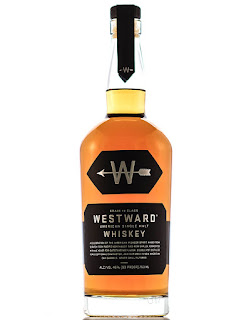 What is this pedantry, you ask? Well, whiskey drinkers will know that single malts are the signature product of Scottish distilleries and are emblazoned with ‘Scotch Whisky’ - oh, yeah, no ‘e’.

Japanese single malts are also some of the world’s finest; Hakushu and Yamazaki to name just two. And similarly, they are ‘whisky'. Australians, likewise, prefer single malt ‘whisky’ as evidenced by such labels as Starward and Lark.

So what is it with the ‘whiskey’ then? Well, enter Westward Whiskey, an American Single Malt of exceptional quality, hailing from ‘let’s keep it weird’ Portland, Oregon.

While your grammar-sensitive eyes may be attuned to either ‘whisky’ or ‘whiskey’, let me tell you, your ‘distilled spirit’ palate doesn’t care two hoots. When the golden liquid swirls in your mouth, exciting your tastebuds, the ‘e’ becomes completely redundant.

There is a divide in the whisk(e)y world over new- and old-world spirits. Scotch whisky is traditionally made from a barley malt mash, while American whiskies trend to use corn and rye, each giving their distinctive regional flavours. You’ll notice American whiskies being sweeter and darker (bronze) while Scotch is lighter (golden) and sharper on the palate.

So what we have from the award-winning Westward Whiskey distillery are unique flavours across the brand's entire range, achieved by following their ‘Minimalist Distilling’ philosophy.

In their own words, Westward begins by brewing an artisanal American pale ale from scratch, using 100%  northwest two-role pale malted barley, ale yeast, and then fermented at low temperatures for extended periods. The fresh ale is distilled twice in custom low-reflux copper pot stills that are designed to create a robust spirit, and transform the fresh beer into whiskey. Westward Whiskey is then aged to taste in new, charred American oak barrels, where Oregon’s dry, hot summers and cool, wet winters create the ideal environment to raise a world-class whiskey.

As the old saying goes, the proof is in the pudding and Westward American Single Malt whiskey displays a robust and fruity aroma with creamy vanilla and brown sugar notes that flow into baking spice, lush fruit, and sweet malt on the front palate, building to tobacco, dark chocolate and leather with a lingering oak sweetness that gives way to stone fruit.

Personally, I prefer a whiskey of this quality either neat or with a single large ice cube or ball so that the unadulterated aromas can be enjoyed, although we did try a ‘bloody delicious’ Cold Fashioned cocktail earlier.