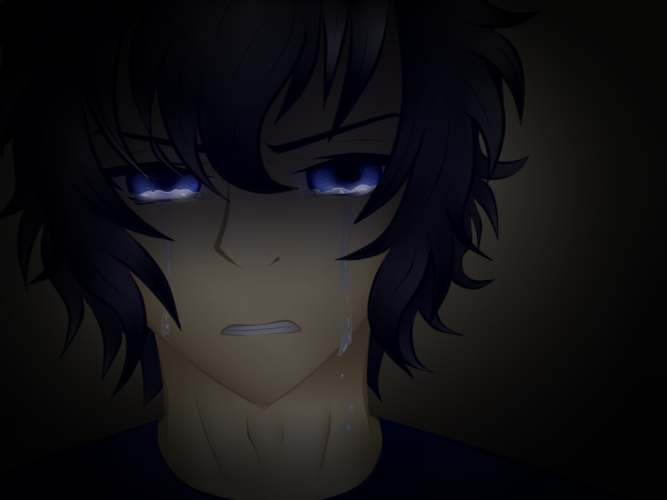 The past is not always a happy place to reminisce. We are lucky enough to be able to look back and only be embarrassed with our stupidity or the younger versions of ourselves. After all, some ninja somehow manages to capture our weirdest and stupidest moments in life. Some people, however, do not have that kind of privilege. To some, looking back at the past means reliving a very traumatic or sad event. This may be abuse, heartbreak, or loss of a loved one. Such cases are better off being shoved under the blanket than displayed for everyone to see.

Galaktika Gamble: Stolen Light is a side story of the author’s original light novel, Galaktika Gamble. It follows the story of a very unlucky human being, Neil Doune, and his best friend, Ivan Voronkov. This side story focuses on Sally’s death. Sally was both Neil’s and Ivan’s childhood friend. Ivan, however, holds her a bit more special than a friend. Neil’s curse, however, spares no one. Neil has seen Sally die at the young age of eight. He even has to break the news to his best friend. If that’s not what messed up means, then we don’t know what it is.

Why You Should Read Galaktika Gamble: Stolen Light

Stolen Light beautifully described how the characters interacted with each other. During the Father’s Day Fishing Competition, Neil was worried of not being able to join for not having a father. Of course, Ivan, Sally, and their families were there to help him. Various scenes were clearly given attention to. Just take the scene where Sally gave Ivan a kiss on the cheek for supposedly saving her during their game. Ivan’s, Sally’s, and even Jessica’s, Ivan’s mother, reactions were included.

[ad_middle class="mt40"]
Why You Should Skip Galaktika Gamble: Stolen Light

The entire novel was riddled with grammar errors and awkward phrasing. These errors generally didn’t affect the content of the story, but if you read a lot it was noticable. Did we understand the story? Yes, we generally did. Did we enjoy reading it? The story’s idea was good, but we found that some of the errors were a distraction. We understand that we don’t know where the author comes from and even if English is their first language. If it’s not, we have to give them credit for writing creatively in their non-native language. If they are a native English speaker, we still have to give them a lot of appreciation for sharing their story with us and can’t wait to see how they improve as a writer in future projects.

The novel’s protagonists were kids, at least during the first few parts of the story. The story starts when they were still four years old joining a fishing competition. When Sally, one of the main characters, died, Neil and Ivan were still just eight years old. For some reason, however, their emotional quotients are similar to an adult. For example, Ivan had a crush on Sally when he was still four years old. When they were eight, Sally seemed to not mind giving Ivan a kiss on the cheek. Ivan, on the other hand, seemed to take it into heart. Finally, Neil had witnessed Sally’s death. In fact, he was covered in blood as he went into Ivan’s residence. Imagine, an eight-year-old boy drenched in blood, who also somehow understood what was happening, did not break down nor got traumatized. He must have had wits as strong as steel back then.

Galaktika Gamble: Stolen Light targets a certain demographic. That is the fans of the original Galaktika Gamble visual novels. We’re not saying that new fans are not welcome to read it. It’s just that even though the story can stand on its own, the buildup is a bit too slow and dragging. On top of that, the writing errors make it harder to read, so it’s harder to jump into the hype train. Nonetheless, we think that the story has potential, but it can still be better.