by admin June 10, 2020
In Wisconsin?  Yep.  Tropical Storm Cristobal scooted up on the wind from the Gulf coast to Wisconsin today.  It started raining in the late afternoon and is supposed to get windy and rainy overnight and tomorrow.  Saves me from having to water the new tree and grass seed, at any rate.

I knew if I didn't make myself cut out some more masks and sew them today I'd spend the day staring out the window.  So I cut and sewed.  I found some quarter-inch elastic that I could put on instead of ties and even figured out how to put a nose wire in the pleated mask.  They all turned out pretty well, I think.  FYI--my fancy computerized sewing machine needs to go to the fixit shop again.  The presser foot assembly isn't pressing down right.  I hope it's a quick and easy fix.  Good thing I have my old faithful Necchi. 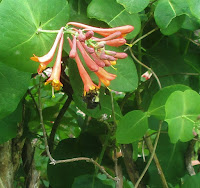 The honeysuckle is starting to bloom so I went out to take a picture to show you and saw this bee buzzing around from flower to flower.  It cooperated and held still long enough for me to snap its photo.


Mona sat gingerly on the softest place she could find, a little patch of sand caught in a depression after the last storm. Today the sea was nearly calm, well, as calm as it gets on the windward side of this scrap of an island. After last night's argument she had slid out of bed, dressed in the bathroom, and driven away before the sun had sent more than the thinnest pink fingers of light to paint the clouds. Her headlong flight had carried her up the leeward coast to the petroleum depot and then down the hill into Rincon nestled in the angles where ancient waves carved a hollow. Only a few dogs were stirring as she silently cruised down the main street of the town. Once she passed the grammar school and the soccer field, she squinted into the sunrise and turned off at the barely visible sign for Boca Oliva, her favorite wild little bay.
The waves that pounded this piece of shore were born off the west coast of Africa and met no other land in their journey to these unforgiving cliffs. She loved the days when they pounded into shore with a booming crash and flung their edges skyward to patter down in suicidal blasts.
She made her way carefully down to the edge of the inlet to find a flock of flamingos just offshore in the shallows created by low tide.  The scene had the air on an animated short. The flock of pink flamingos all faced the same direction and, necks stretched, waded away from the splashing of the school of bait fish on the surface behind them.
Mona sat in the rising sun staring at the birds, an imaginary soundtrack running through her head. "Why are we running? Do you know why we're running? What are we running from?" The nasal honks, in no way synchronized, and the rigidity of their slender dark pink necks gave an air of panic to their movements.
She was struck by the realization that the birds' knees bent backwards, that they worked more like elbows and she frowned trying to figure out why. It was easier to put all her energy into discovering the evolutionary reason behind the flamingos than to think about Jack and the dangerous game he and Manning were playing.


I watch part one of the Oprah special tonight, Where Do We Go From Here?, and learned a lot about the Black experience in America that I had no clue about.  I feel kind of foolish not to have noticed the deep disparity.  So much to think about.
--Barbara
Share Share on Facebook Tweet Tweet on Twitter Pin it Pin on Pinterest
Back to Feed