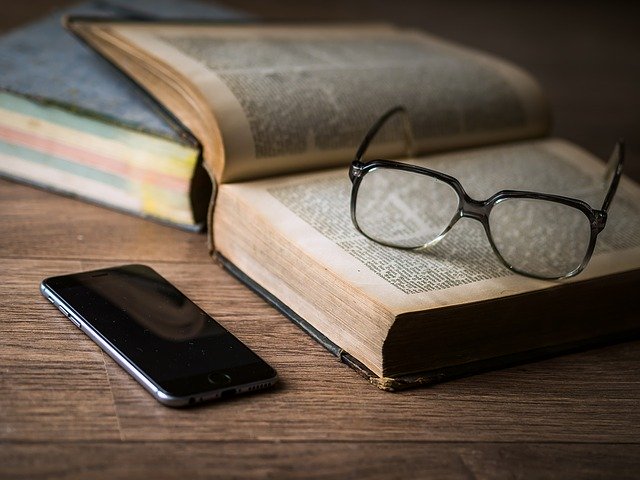 Do you struggle with spelling and grammar?

Even if you’re a native English speaker, there might well be grammatical rules that confuse you – and you may find that you spend a lot of time poring over your draft text, trying to figure out what needs to be edited.

This is where  grammar checker apps can really help. They go far beyond the simple spell checkers of the past: they’ll spot cases where you’ve used a real word but in the wrong context.

Many of the more advanced ones will point out instances where your style could be revised, too (such as where you’ve used a more complex word than you need to, or where you’ve included cliches in your writing).

There are so many grammar checker apps out there, though, you might be wondering which one to use. We’re going to run through seven of the best in a moment, but first, let’s look at why it’s important to test out grammar checkers before using them.

A key consideration, when you’re choosing a grammar checker app, is whether or not it actually works! After all, you don’t want to use an app that ignores half your mistakes.

To help you compare each of the different apps, I tested the free versions using a standardised piece of error-ridden text:

Lastly I went to London. I visited the Tower of london and Buckingham Palace. I would of bought some soovenirs too, but I ran out of money.

The text should read as follows (I’ve indicated the corrections in bold):

Lastly, I went to London. I visited the Tower of London and Buckingham Palace. I would have bought some souvenirs too, but I ran out of money.

As you can see, there are four mistakes in the original text:

How did the different grammar checker apps do? Let’s find out. Note that with most of these apps, you’ll need to create a (free) account in order to login and use them.

You might want to create your own piece of error-ridden sample text to use, too, so you can see whether the grammar checkers spot your mistakes.

Google Docs is a free online word-processor provided by Google. You might well have used it to collaborate on documents with others, whether at work or school, as it’s an easy way to have one document that multiple people can comment on and edit.

Google Docs correctly identified that “London” should have a capital in the second sentence and that “soovenirs” was misspelt. It didn’t flag up the incorrect phrase “would of”, however, despite this being a common grammatical mistake. It also didn’t suggest adding a comma after “lastly”.

If you use Google Docs already, it’s certainly worth checking any words or phrases that it flags up as potentially wrong. It’s not a dedicated grammar checker app, though, so it won’t catch everything.

Microsoft Word is so ubiquitous that you’ve almost certainly used it at some point in your life. Although you might think of it as a piece of software installed on your computer (it ships pre-installed on Windows PCs), you can also use the free online version Office Online from Office.com.

I was impressed to see that the free version of Word online flagged up all four of the errors (and indicated the right  corrections). Interestingly, it counted the lack of capitalisation on “London” as a spelling error rather than a grammatical one.

If you’re already using Word, you may find that the in-built spelling and grammar checkers are sufficient for you. It’s still well worth considering using one or more of the other apps as a back-up, though, especially if you’re working on a particularly important document (such as an essay or your resume).

Grammarly is one of the best-known grammar checker apps, and you may well have seen ads for it. But does it deserve its great reputation?

While you’ll need to pay for the premium version of Grammarly if you want more advanced features (like the ability to detect the misuse of the passive voice), the free version offers an impressive range of features. You can try it out through the Grammarly website by simply copying and pasting your text, but for long-term use, you’ll probably want to install it as a Chrome plugin or Microsoft Office download.

Grammarly underlines all errors, whether of grammar or spelling, in red. As you can see, it spotted all four of the issues with my sample text. One great feature is that Grammarly provides a detailed explanation of errors, so you can learn where you’ve gone wrong.

For instance, if I click on the underlined “london”, I get a short explanation which I can expand to see further examples: 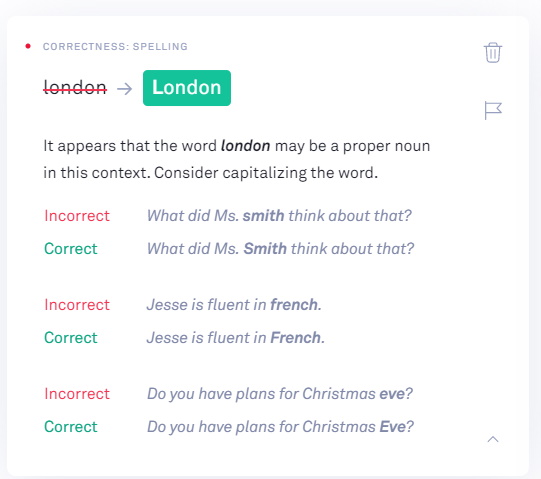 Grammarly is a great option not only for checking your grammar and spelling thoroughly, but also for learning why something has been flagged as incorrect. It integrates with lots of other software (such as Google Chrome, Microsoft Office, Outlook, and more) so you can use it while composing emails and messages, as well as for checking documents.

I reviewed the premium version of ProWritingAid in detail in this post (which also includes a discount code) … but how does the free version measure up? The good news is that it’s richly featured, with lots of reports that you can run, picking up on things like overused words, cliches, and much more.

You can also see how your work measures up to that of other people who’re using ProWritingAid, with statistics like “Your sentence variety was higher than 56% of ProWritingAid users”.

ProWritingAid picked up all four of the mistakes in my sample text, and provided brief explanations where appropriate (though it didn’t offer more detail for these, like Grammarly does): 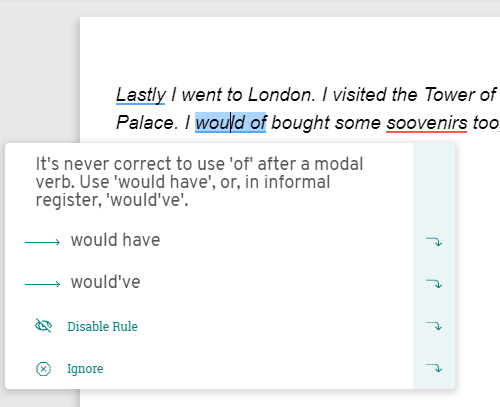 ProWritingAid offers a huge range of reports – these can help give a better sense of how your writing is working overall. (For instance, you might find that your average sentence length is too long.) It’s a great app for anyone who’s working on a long piece of writing, like a whole book, though you can certainly use it for shorter pieces too.

Hemingway Editor takes a quite different approach to grammar checker apps like Grammarly and ProWritingAid, as its emphasis is very much on writing style. It promotes a style that involves simple, straightforward sentences, avoiding the use of the passive voice and avoiding using too many adjectives.

This means that the Hemingway Editor might not spot all grammar errors, and it’s not a spellchecker, so it won’t necessarily spot any spelling mistakes – as you’ll see from the test.

The Hemingway Editor app didn’t pick up any of the errors in my sample text: it’s flagged up “Lastly” not because it needs a comma afterwards but because it’s an adverb.

The misspelling of “souvenirs” and the lack of capitalisation on “london” aren’t flagged up, as Hemingway Editor isn’t a spellchecker. The phrase “would of” isn’t corrected, either.

If you want to write in a simple, clear style, Hemingway Editor should help. However, sometimes it flags up sentences that are perfectly readable (even if on the long side) and it also ignores some outright errors. It’s best used in conjunction with another grammar and spelling checker, though, as otherwise mistakes might slip through.

After the Deadline is a WordPress plugin (though you can also use an online version here) that checks blog posts for grammar and spelling mistakes. It’s a simple, pared back grammar checker – so if you find apps like Grammarly or ProWritingAid a bit overwhelming, it could be worth a try.

Like Hemingway Editor, you can also use it on the web completely free, without needing to supply your email address or create an account. This makes it a handy tool if you’re using a public computer (e.g. at your local library) and you don’t want to log into a bunch of different websites.

After the Deadline didn’t spot that “london” needed a capital, or that there should be a comma after “Lastly”. It did, however, pick up on the incorrect “would of” – unlike many other checkers. It also flagged the misspelling of “souvenirs”.

After the Deadline is ideal for bloggers, as it’s compatible with WordPress and Windows Live Press. It’s also a great option if you run a social network using BuddyPress or a forum using bbPress. You can find the list of compatible software on their Download page. This includes Chrome and Firefox, so you can use After the Deadline even if you’re not a blogger!

You can try out Ginger online, but it’s really designed to be used with other software: it can be downloaded for Windows or iOS, and it can be used on mobile devices. As well as the grammar checker, it offers a “sentence rephraser” that gives you alternative ways to write your sentences, and a “personal trainer” that helps you learn to write English correctly by identifying the pattern of mistakes you’re making.

Ginger also offers some features that go well beyond many grammar checkers, such as the ability to have Ginger read your text to you, and a translation tool – though note that not all features are available the free level. There’s also a (free) Android keyboard that you can install on your phone: it’ll pop up as the keyboard whenever you’re typing anything, so you can instantly check your spelling and grammar.

When I tried out my sample text using Ginger’s online tool, it picked up three of the four mistakes (you can see the original text with the mistakes highlighted in red, and the corrected text with the corrections in place in blue). It didn’t catch “would of”, however.

Ginger is a great option for Mac, iPhone, or Android users. It works with Apple’s Pages word-processor, and it can be used as a replacement keyboard on Android phones – allow you to check the grammar and spelling of everything you write.

You can try out the online tool without creating an account or logging in, too, so it’s an easy way to run a quick check on a few sentences.

No app can be a replacement for careful self-editing, or for hiring an actual editor to go through your work. Apps can provide a valuable back-up, though, and can help you get better at spotting your own mistakes.

So which grammar checker app should you use? Any of these could work well for you, and since all offer at least a free trial, it’s worth giving several of them a go to see what you prefer.

If you’re not sure where to begin, though, my favourites are Grammarly and ProWritingAid (reviewed in depth here) – Grammarly as a great all-round checker that offers in-depth explanations, and ProWritingAid for anyone working on a long text, due to the detailed reports it offers. Why not try out one of those this week?

Now that work is going remote/virtual, writing skills are more important than ever! Grab a premium subscription and receive our writing tips and exercises every day! Click here to start a 15-day free trial..

Publish your book with our partner InstantPublisher.com! Professionally printed in as few as 7 days.